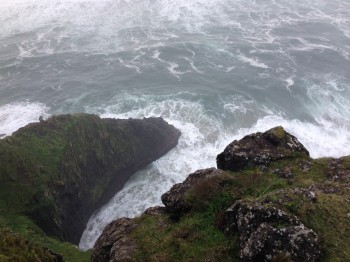 Think how the health of our planet would improve if every teenager pressured their peers into making a few simple behavior changes to reduce greenhouse gas emissions. This is exactly what four teenage Oregon Coast Aquarium Newport volunteers are doing to reduce ocean acidification. Calling themselves MOANA (Making Ocean Acidification Nationally Aware), these teens are creating a social marketing campaign to inform their peers about ways they contribute to ocean acidification and motivate them to change those actions. Action Research is helping MOANA build the framework for this campaign while also building the teens social marketing skills.

Last spring, Jennifer Tabanico provided the MOANA teens with community-based social marketing (CBSM) training at the aquarium and has since been guiding them through development of their very own peer-focused CBSM ocean acidification reversal campaign. Because the four MOANA volunteers live long distances from one another in Oregon and have incredibly busy lives, they primarily meet remotely via Google Hangouts to develop their social marketing campaign. Jennifer joins their online meetings to offer her CBSM expertise when needed. MOANA has completed several crucial steps in the CBSM program development process. In consultation with ocean acidification experts, the MOANA teens researched 20 different behavior changes that lower carbon dioxide emissions and its consequent ocean acidification. Based on subsequent feedback from teen friends and family members, MOANA narrowed those down to the following behavior changes with the greatest relevancy and ease of implementation by teens:

MOANA subsequently conducted in depth interviews with teen peers to determine which of these behavior changes they would be most able and willing to do. The interviews gave MOANA a real understanding of teen barriers to adoption of these behavior changes as well as teen perceptions of their potential benefits. The interview process also gave the MOANA members valuable insight into how to communicate effectively with their peers.

The top ranked behavior change by interviewed teens was “Turn off and unplug vampire appliances” because:

MOANA members then surveyed classmates and teenage visitors at Oregon Coast Aquarium Newport to determine to what extent they currently turn off and unplug ‘vampire appliances’ at home (baseline behavior) and their perceived barriers/benefits to doing so. Most respondents reported unplugging unused vampire appliances half the time or less and indicated they would unplug them more consistently if they knew about the associated energy savings and were reminded to do so.

Based on this information, MOANA created a two-part behavior change campaign consisting of:

MOANA members are currently pilot-testing their campaign with the help of an evaluation consultant.

During the past year that Jennifer has spent guiding the four MOANA teens, she’s been awed by the speed and agility with which they’ve adopted community based social marketing skills. Perhaps what fuels them is their love of “moana”, which means ocean in Hawaiian. Stay tuned for the results of this inspiring youth-driven project…